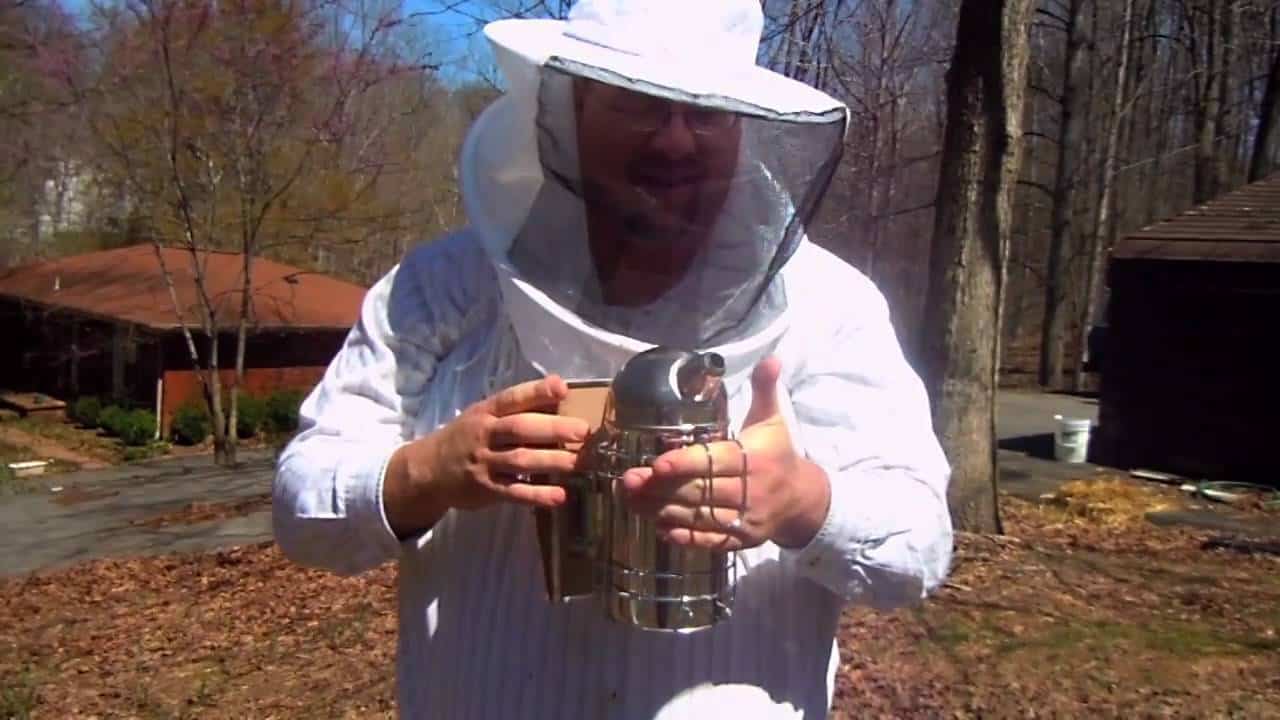 Anyone that has the funds to buy a hive and a install a package of bees can have bees.  However, the difference between being a beekeeper and a beehaver is the willingness and ability to manage your hives.  This management is what will get the results you desire.

An essential tool in your management toolbox is hive inspections. You need the ability to see what is going on inside your hive.  Without that, you cannot make good decisions on what you need to do with your bees.

Today I will attempt my first hive inspection

Now, if you are anything like me, you will be itching to dig inside your hive a few hours after you have installed your bees. I was excited to finally get started that I kept hanging out and hoping for a reason to check on them. However, you need to wait at least 5 days before you open your boxes up. Your girls need their privacy to get used to their new home.

Luckily, my teaching schedule had me gone from can see until can’t see.  Although the wait was terrible, I physically could not cheat and open the box too soon.

Wait a Week at the Least Before Inspecting

Saturday afternoon, the week after I installed my package was the day I finally got to check my hive. It was windier than I would have liked, but it was dry, sunny, and warm. This time Genny and I were going to do everything right, or at least try to. I got her another Tyvek suit to wear, but she did not like how it looked on her.  Instead she put on a light grey sweatshirt. My protection was a tucked in a long sleeve white shirt and my veil. I did not want any bees in my bonnet this time.

We put all out tools, and anything we might need in a tray so we would have it with us.  This was so that once the hive was open we would not waste a lot of time. I still need to find an inspection checklist to use for record keeping.  Unfortunately, I have not quite decided on what format to use,  This time our main concern was to see if the Queen was released.  Additionally, we wanted to practice finding her.  Lastly, we were curious to see how much comb was drawn out.

We Had Smoker Problems

This was our first use of a smoker, and it took us some trial and error to light it. The smoker fuel I used was commercial smoker pellets.  However, I think I am going to use straw once that is used up.  I have heard it doesn’t matter much what you use as long as its not toxic.  You also don’t have a “hot” smoke that will burn your bees.

I was careful to move slowly and deliberately.  We approached from the side of the hive.  Basically, we were sneaking up on them. Next, I refilled their feeders, and then opened the hive body.

I was not as careful of spacing the frames when we installed the packages as we should have been.  As a result, there was a lot of “burr comb” inside the hive. I should have cut it out before it grew too large, but I decided to just space the frames better and let the brood that was already laid in the burr comb hatch.

The Queens Escaped their Containers.

Both our queens had been released, and were laying eggs in the center of the middle frames, just as they are supposed to. The center 2 frames were fully drawn out, and most of the next two frames were also. Half of the next frames were being worked on.  Unfortunately, none on the outermost frames had anything more than a bee or two.

I did see some pollen being stored in the comb.  In my haste I forgot to look for any honey or sugar water in the combs.  This is the reason you need a checklist.

Remember to move slow and gentle and work from the outside in. This is something I forgot to do a couple times on the video. I put the frames in the empty hive body I put the feeder in; this keeps the frames off the ground.

I know that you’re not supposed to add another box for brood until they draw out all the frames, but at the same time I know that the queen is laying eggs, and that the population is growing. Because I know my schedule would preclude me from checking the hive for at least a full week, I went ahead and added another medium hive body with frames and foundation. I expect them to “chimney” and start on the middle two frames in the upper box before they finish the outermost frames in the lower box.  Consequently, next week I will probably have to move some frames around.

I also saw some dead hive beetles in my traps.  This means I will also need to put out more traps in the hive, and start getting some more natural remedies ready for the next week. I want to stay proactive and on top of the SHB problem, but I don’t want to have to resort to putting organophosphates in my beehive.  Even if they are effective at killing beetles, its also what nerve gas is made of…

This is going to be the last of the beginning bees series, while its not enough to know how to become a beekeeper, its enough to get you started, and I don’t want to bore you with weekly videos of hive inspections. I will report back with any new observations or if something particularly neat is happening, for example harvesting honey, or any organic solutions to pest management.

I am enjoying learning about my bees, and I find myself standing near the hives and just watching them buzz around. (just like I do with the chickens)

Lastly, for those keeping score, I have opened the hives several times since the package install, and the posting of this article, and I have not been stung since the first day….