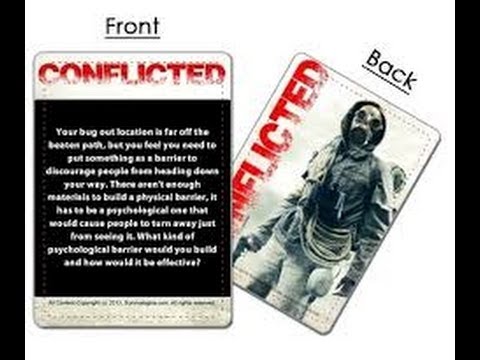 I recently purchased a set of conflicted cards and used them to discuss survival issues with my wife.

When I first saw the cards I knew I would have to get them, I wasn’t sure how good they would be, but I immediately recognized the value of the concept.

I am pleased to report that these cards are really well thought out and I got a lot out of using them.
They are designed to be used as a game – and each card has a survival scenario and to play the rules are simple:

Although Conflicted: The Survival Card Game has no foul language or nudity, the content is aimed at mature audiences only. Life in a post-apocalyptic world isn’t to be taken lightly.

My wife and I take turns digging through the cards and selecting a scenario that resonates with us and then asking the other what they would do in the scenario.

By using the cards In this manner we can feel out the similarities and differences in our mindset. Its amazing how this simple card set can break through assumptions and point out true beliefs.

As SouthernPrepper1 said in his review , I also see some use as a method to vet potential survival team members, but I have yet to use it in this context.

At $14.95 I think this is a very good deal – the discussions this game facilitate are worth much more than the price of the cards. Personally I plan on bringing this to the next family gathering and seeing just what other members think…