Home » Articles » How to Make the Easiest Homemade Jerky Ever 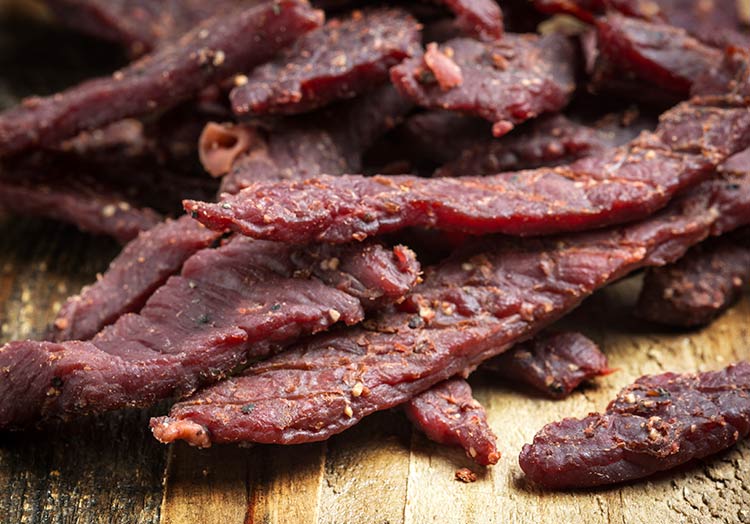 How to Make the Easiest Homemade Jerky Ever

One of my favorite foods to make in my dehydrator is homemade jerky, I don’t make it as much as I would like though, because I have this uncontrollable impulse to sit down and eat it right after I make it. I do squirrel some away for storage but most of it gets eaten a small bit at a time as I walk through the kitchen.

If you like this, you will LOVE my Homemade Slim Jims.

It’s a pretty simple process – select meat, trim, cut and season it, dry it, and store or eat it. Historically almost every culture has done it for food storage, and it remains a popular activity among outdoors-men.

I like using sirloin, but any lean roast will do – You do not want a lot of fat, as that contributes to spoilage, so you also have to trim any fat you find.

Here is a Tip to Make it Even Easier

(Here’s a tip for those that like jerky, but don’t want to spend a lot on meat, or don’t like slicing it. You can use prepackaged “steak-ums” or any discount Philly cheese steak sliced meat.) I have gotten them in bulk at the big box grocer for around $1 a box on occasion.

Slice your meat thin, around 1/20 inch thick. If you don’t have a slicer you sometimes can get your butcher to do this, however, I have noticed that grocery store butchers are becoming less available as food sales change. Personally I bought a hand crank slicer from an online auction, but I would also like to buy an electric one in the future. You can slice the meat against or with the grain, depending on your preferences, however, if you cut the slices against the grain it will be easier to chew and break up if your going to make pemmican.

The next step is to marinate your meat for flavor. There are many recipes online and in print as well as pre-made marinades. Personally I throw together whatever looks good in the cabinet and mix with water. I use garlic powder, pepper, onion powder, taco seasoning as a base of dry ingredients. If I am going to try to store it long term I use sodium nitrate cure to help with mold, but if I’m going to just enjoy it as is I leave it out.

My wet ingredients are normally hot sauce, meat marinade (Dale’s usually, but Worcester or soy on occasion), wine, and sometimes vinegar (for a biltong flavor). This is all to my taste, feel free to experiment. I make enough mix to completely cover the meat to prevent browning (oxidation) and then keep it in the fridge for no less than 10 hours, but sometimes up to 24.

You can then coat the meat in a dry rub, but I normally don’t as I use a lot of flavorings in the marinade and I don’t want to overpower the meaty goodness of the jerky itself. Be aware of the fact that dehydrating will concentrate the flavors so a lot of spice can quickly turn to too much spice.

You then need to remove the water from the Jerky. I have an inexpensive round dehydrator as I collect the skills to build a much larger solar dehydrator, but you can use an oven on low (or around 160ºF) with the door cracked. You could make a cardboard box with a light bulb and some sort of cheese cloth or mesh screen (be careful for the fire hazard). American Indians sometimes just draped the slices over teepees of sticks placed in the sun. It’s not a hard process, but for food sanitation purposes I like using a method that prevents flies from laying eggs, and produces enough heat to bring the meats internal temperature to 160ºF without cooking the meat.

The drying process can last from 2 hours to 10 depending on meat thickness, humidity, and drying method.

If you want to store your jerky let it cool before sealing, so that any heat does not allow moisture to collect inside your container. Use mason jars to prevent additional moisture buildup, and be careful about mold growth. (if you use jerky cure sometimes you can get a white bloom of nitrite crystals, so make sure any spots are that and not mold.)