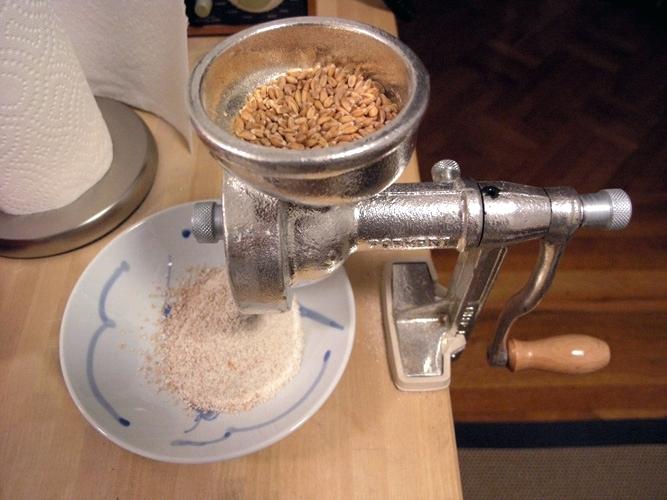 If you’re going to store wheat, you need to be able to grind it.  And while it has been ground in the past by throwing some in a metal coffee can and hammering a piece of iron pipe into the grain until its broken up, that way is loud, long, and energy intensive. In my book 52 Unique Techniques for Stocking Food for Preppers I actually show the iron pipe method.

It’s a lot simpler to buy a wheat grinder.  However, there is a huge difference in price and many types of wheat grinders.  In this post we will explain some of the basic differences as a starting point for you to be able to decide what type is best for your intended use.

There are three basic types of grinders:

The oldest grinder are stone wheels.  Until recently they were the only type available. Stone grinders have two circular stones. One stone is stationary, and the second turns against it.  Starting at the center of the stone and radiating outward, grooves are cut into the stone. These grooves become shallower as they near the ends of the stone, until they disappear at the outer edges. When grain is ground, it falls through a channel into the center of the two stones. As the stone rotates, it pulls the grain out through the channels where it is ground. As the grain rides in the channel it becomes ground progressively finer until flour falls out the outer edges of the two stones.

Historically, stones in grist mills were three feet or more across, and weighed hundreds of pounds.  This took the force of a water wheel, or windmill to turn.  Modern stones are much smaller, now only inches, and are not made from natural stone, but now use either cast iron or artificial stone.

Stone grinders are very durable and will last a lifetime if not abused.

Impact grinders use rows of ‘blades’ placed in circular rows on metal wheels. Like a stone grinder, one wheel turns and the other wheel is stationary. The two wheels are aligned so that the rows of blades inter-mesh.  As the wheel turns at thousands of RPM, the closely aligned blades pulverize the grain into fine flour as the grain works its way to the outside of the wheels.

Once again, this depends on your use.  You need a manual grinder if your need if for your disaster food storage, but you need to be aware that it is more work than you would think to grind wheat, especially with an inexpensive grinder.  I would suggest that if you buy a manual grinder (and you should have one) that it has a pulley along with a crank, so you can mechanize it if needed.  There are internet plans to hook a grinder to a stationary bike.

Electric make short work of grain grinding, but with impact mill the trade off is that a quite impact mill sounds like a vacuum cleaner, and a loud one will positively hurt your ears.  Also you need to be aware that some electric powered mills grind so fast that they create enough heat to harm your flour.  Your wheat will taste better if ground slow so that the mill stays cool.  Electric mills are also the most expensive option, but you will find it worth it if you begin to use your mill to grind flour now, and get used to fresh bread before you are forced to eat out of your store.

You know I like redundancy, and I would suggest getting both.  Personally, since the mill I want costs as much as the Glock I want to buy my wife, it’s on “the list” but I do have two manual mills so I have one for a spare or to trade.