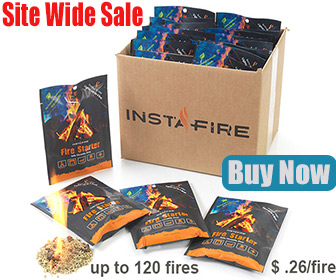 A few weeks ago I was approached by the guys at Instafire to try out their product. I saw it on Sharktank and was already familiar with it so of course I said okay. I have messed with various fire starters before so I was not really expecting much, but after using it, I think its one of the best firestarting products I have used.

It burns a lot like vasoline soaked cotton balls for those woodsman who have tried that common tool, but it is infinitely less messy and burns a lot hotter.

Using Instafire is simple, if its the charcoal starter (as seen in the video above) just light two sides of the bag and place under the grate so air can flow, then stack charcoal on the grate so the flames can ignite it.

My camera did not do so well in the heat, so it is a little foggy in the video, but you can see in it that a single starter pack burned long after the coals started to turn white, which is an indication that this stuff is as fire and forget as a burning tool can be.  You don’t have to mess with lighting and relighting and pouring lighter fluid and relighting over and over again.

Now for the fire starter bag, I didn’t video this because its just too easy – pour the contents on a non-porous surface (like a rock) light it and put your wood over it.  I am not one to follow directions, so I poured mine on a log and then pout more wood over it and that works as well.

This product is simple and contains no hazardous chemicals – its basically wood pulp, a special blend of paraffin wax, and perlite.  When its done, it is a great fertilizer for your garden.

Instafire is such a great product, in 2011 it won the innovative product of the year award as well as being funded on Sharktank.